Located at the Civic Center in Afton, Wyoming, the CallAir Museum commemorates the history of the Call Aircraft Factory founded in 1939 by Reuel Call. CallAir airplanes were designed, developed, and manufactured at Afton from about 1940 to 1970. A prototype airplane was designed and built from 1939 to 1943—the predecessor of the CallAir A-3 cabin plane. In the first years of the 1950s CallAir snow cars were built. By 1955 the A-3 had been converted to an agricultural spray plane—the CallAir A-5. In the early 1960s the CallAir A-9, a larger more powerful version of the A-5, was put into production, followed by the still larger CallAir B-1 in 1968.

The CallAir Foundation is a nonprofit, 501(c)(3) tax exempt corporation, founded in 1992 by Reuel Call. The Foundation has sponsored the CallAir Museum since its inception. The original home of the museum was a larger hangar building located south of Afton. The building was completed in about 1994. Vintage CallAir A-3 and A-5 airplanes were restored about that time. A CallAir B-1 was subsequently acquired and restored. General historical information was gathered, and a picture gallery of personalities associated with the Call Aircraft Factory was created.

In 2005 the museum moved to its current home in the Afton Civic Center prominently located on North Main Street fronting the Lincoln County Fair Grounds. The Civic Center is jointly owned by Lincoln County and the Town of Afton. William Call is the president of the Foundation. Glen Call is the Tour Guide Coordinator at the Museum. For tours you can call Glenn Call at 307-885-3995 or 307-413-5198 during daylight hours, Mountain Time.

Snow cars were manufactured at the Call Aircraft Factory from the late 1940s into the 1950s. They were an adaptation of the CallAir passenger plane. They were used for recreation and to access remote areas during the extended Star Valley winters. Two popular destinations for snow car enthusiasts were Granite Hot Springs near Hoback Junction (still open today) and Sam Young’s Greys River Ranch (east of Alpine). 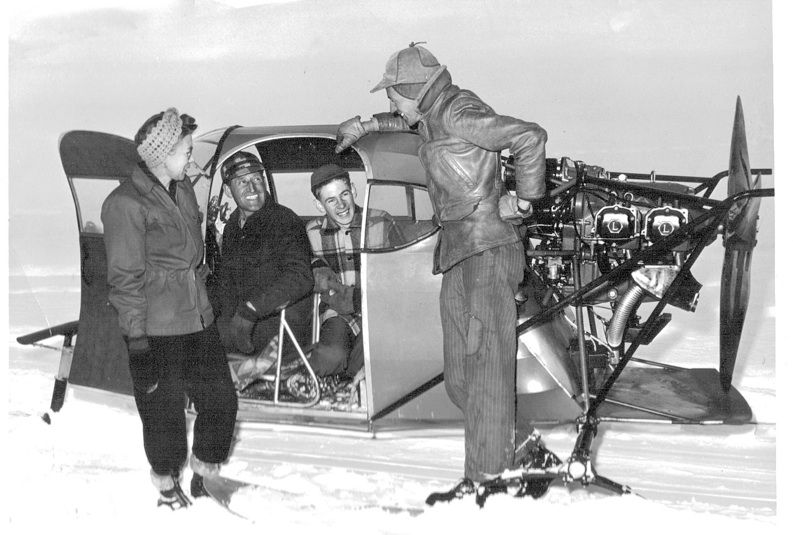 A forerunner of today’s snowmobiles, snow cars were used for both winter fun and winter work. Barlow Call was a test pilot trained in the war. He used airplanes to hunt coyotes and measure snow. He could take off from remote fields and mountain slopes and land “on a dime.” He sometimes took off from the parking lot. He would fly over the landing field, cut his engine and holler down to the people below. On the right day he would fly directly at Star Hill east of Afton where the wind would lift his plane high into the air. Above the intermittent spring he would turn off the engine and soar. Then to start the engine he would put the plane into a dive. When the airspeed reached “max” the engine would “kick over.” Like the CallAir he flew, Barlow Call is an unforgettable legend.

At the time the Call Air Snowcar was built, there was a need for a vehicle to transport people quickly over the snow. The Snowcar provided a practical solution for snow bound regions. Using aircraft-type construction, the Snowcar was strong and light in weight (450-550 pounds empty). The enclosed cab allowed two passengers to ride comfortably; however, it was possible to squeeze three people inside, if necessary. The Snowcar utilized 65 to 85 hp Continental air-cooled engines. With the larger 85 hp engine, options like a starter and generator were offered.

The Snowcar utilized aircraft steel tub construction, but the skis and springs were made from duraluminum. Fuel capacity was 20 gallons. Also offered was a special trailer for carrying the Snowcar on roads and highways. The Snowcar proved itself over and over again throughout the rugged winters of Star Valley, Jackson Hole and the Green River Lakes country.

The first CallAir, prototype of the CallAir A-3, was built in 1942-3. In 1939 Reuel Call sat down with his uncle Ivan Call and his brother Spencer Call to plan the design, development, and construction of an airplane that would fly in the mountainous terrain and valleys of Western Wyoming. 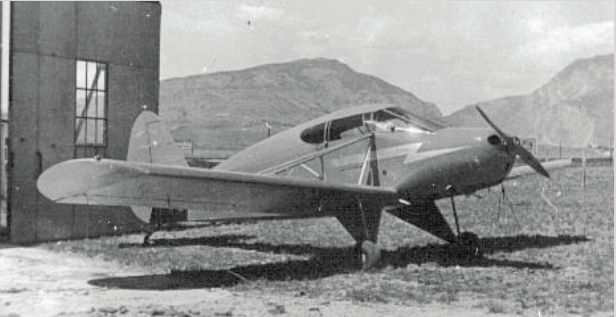 This first plane became a reality during the war, but assembly-line production had to wait until parts, materials and engines became available. The A-3 featured a 43 inch, three passenger bench seat, a 186 sq. ft. wing area, and a 6-cylinder 125 hp. Continental engine. Takeoff distance was 500 ft. Climb rate was 1,000 ft. the first minute. The service ceiling was 17,500 ft. The empty weight was 1000 pounds with a useful load of 550 pounds. Cruising speed was 120 mph and the stalling speed was 42 mph. Climb rate at sea level was 1,000 feet per minute and the usable ceiling was 17,500 feet. 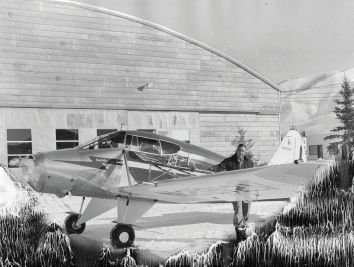 Over 50 A-3s were built at the factory, which employed about 100 Star Valley residents. Many of them became skilled technicians—expert at working with steel, wood, paint and fabric. Ken Arnold made flying saucers famous. He first saw them from the cabin of a CallAir A-3! On June 24, 1947 Arnold was flying near Mt. Rainier when he witnessed a series of reflections that came from saucer-shaped objects flying in the distance. Others later made “corroborative sightings.” Since then both Arnold and the CallAir have enjoyed lasting fame.

Herb Andersen came to Afton in 1953. He would later become the manager of the Call Aircraft Factory. He converted the CallAir A-3 into a crop duster—the CallAir A-5. He took the turtle back off the fuselage, removed the passenger seat and replaced it with a tank to hold chemicals. He cut down the sides of the pane to improve pilot visibility. He installed a 150 hp. engine and added an 18 cubic ft. hopper. About 200 A-5s were built. 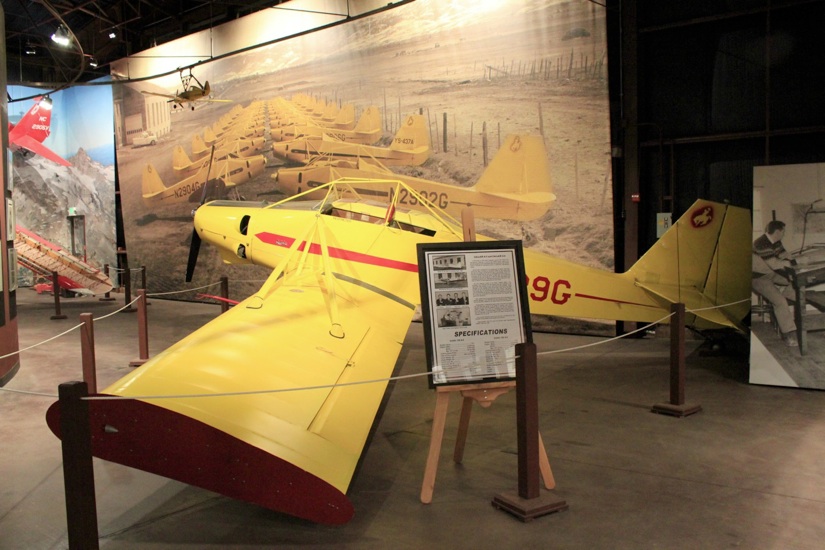 About 1960 new factory owners, Doyle Child and Ted Frome of Afton, supported Mr. Andersen in the design of a larger crop duster. The result was the A-9, the most successful CallAir. The plane featured a single-place enclosed cabin, a 290 hp. engine, a wing span of nearly 35 ft. and a 1,600 lb. hopper capacity. About 850 A-9s were built during the 1960s. The flying model is a unique, custom-built interactive display. You’re the pilot. Push the button to make it fly! 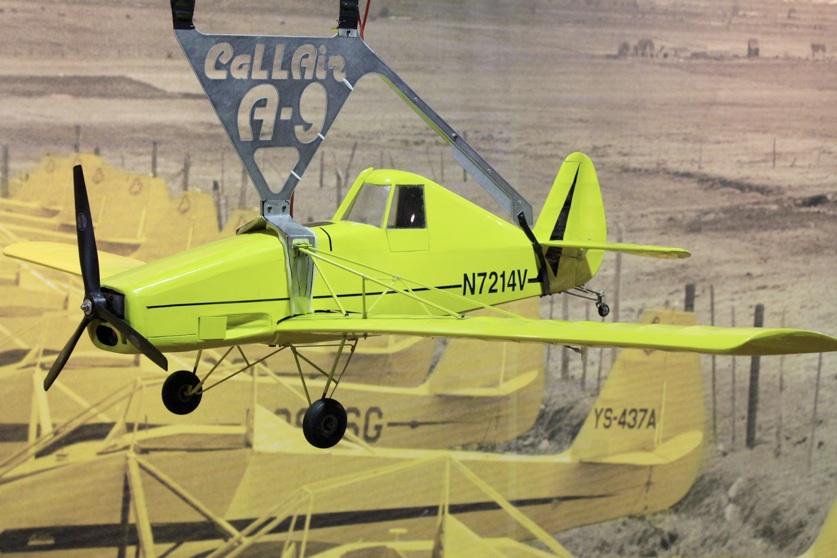 The CallAir B-1 is depicted approaching from the mountains east of Afton. This king of the CallAirs was designed by Mr. Andersen and built in Afton during the late 1960s. It features a 450 hp. radial engine, three-bladed propeller, a 300 gallon hopper, a 44 ft. wingspan and special, reinforced landing gear. Note the wire cutters on the landing gear and windshield (picture down below). They enable flight through - rather than over - power lines! 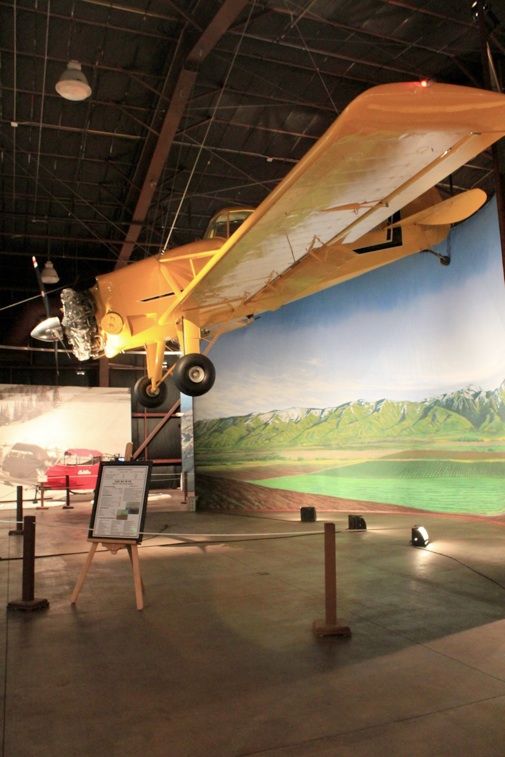 Pound for pound and power to weight, this B-1A is the top bird in its class. It was a very forgiving plane and presented no transition problems for pilots moving up. Afton production line for the Call Air A-5 and A-6 aircraft. Approximately 200 of these planes were manufactured between 1954 and 1960. Two models of this aircraft, the 150 A-5 and 180 A-6 were produced. A rather unique design placed the hopper and pilot side by side in the open-air fuselage. The later model boasted a 180 hp Lycoming, an empty weight of 1170 pounds and a useful load of 1180 pounds. Loaded at 2,150 pounds, the take-off run was 550 feet. A photo-mural looking South at the Afton Call Air aircraft plant. Here can be seen a number of Call Air A-6 ag-planes awaiting delivery to new customers around the world. 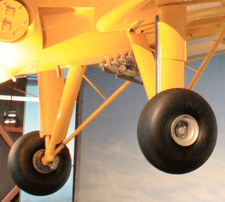 Get more info and tours from the CallAir web site: http://CallAirMuseum.org/