Like any other historical area, Star Valley has its share of various roadside signs, historical markers and pioneer buildings. We have arranged the following things to see as if you were traveling from South to North on Hiway 89 through Star Valley. GPS coordinates are also shown for precise locations. Click on any one of the list below to see these landmarks . . . 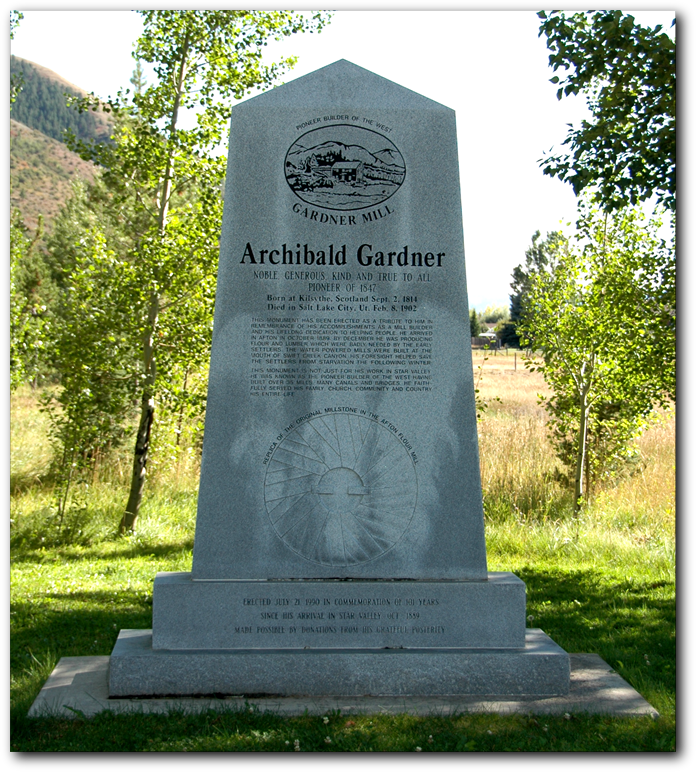 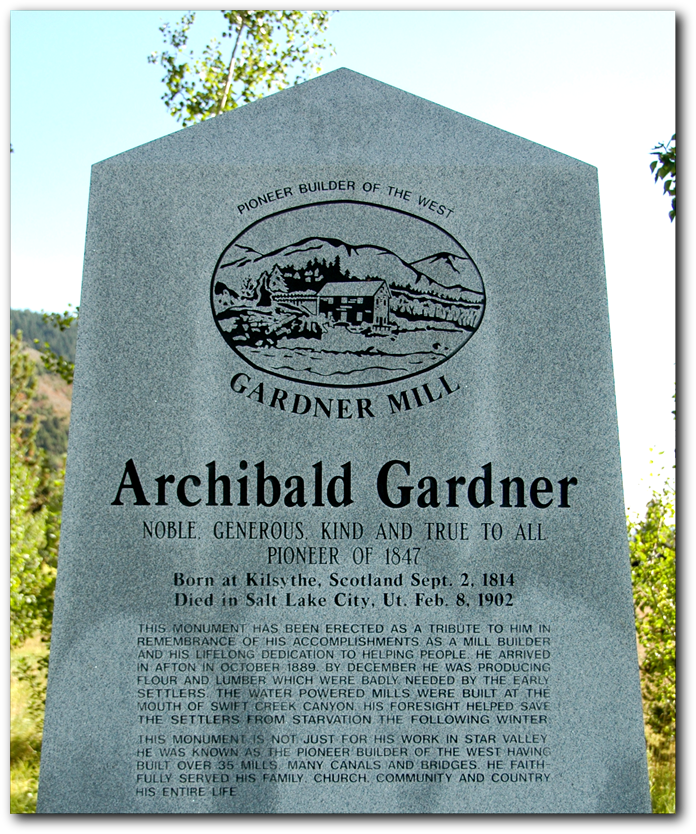 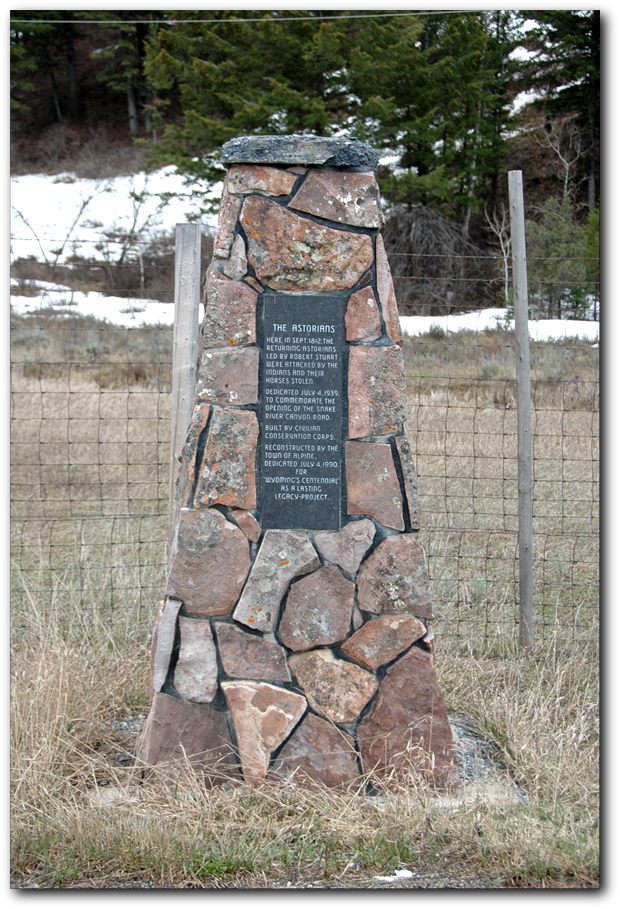 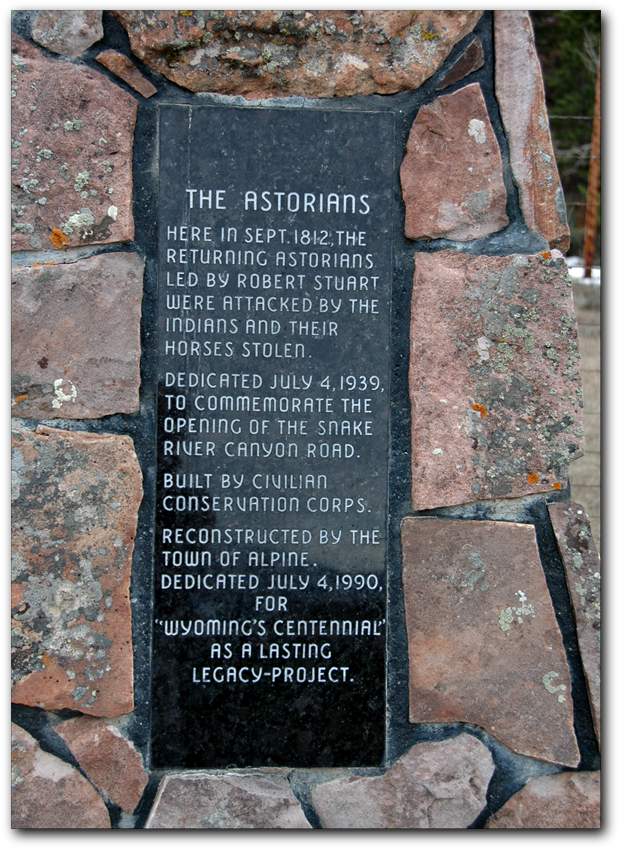 Alonzo and his eldest son Lonny, then age ten, were absent in the spring of 1889 working in Montana. The family was living on the homestead in Etna in a tent and an overturned wagon box. Anna Eliza (age 32) was left alone with six children, the youngest but a baby. Wife Anna Eliza,my grandmother, having spent the previous winter under these primitive conditions, wanted a house. She had the knowledge and skill (having learned the building trades from her contractor father) to build a house and most importantly she had the will and determination.

She hauled the stone for a foundation from the east side of the Valley, probably from Prater Canyon, and selected the logs from the area what is now the Star Valley Ranch. She carefuly square-hewn the logs to the proper size and thickness. Uniform poles were used for the joists in the floor and ceiling. Note the log connections at the corners. It is our understanding that this was the first house in the Lower Valley with a shingled roof. Dirt roofs were common place. The Turners had recently opened a shingle mill on Willow Creek and the shingles probably came from there. Because of her construction methods this house has stood the test of time.

Anna Eliza died in 1899 and Alonzo remarried in 1902 and the the family continued to live in the house until about 1912 when Alonzo sold out. During the next twenty-five years, the following subsequent owners and families lived in the house, although not necessarily in this order: Reynold Robinson, Rob Erickson, Roy Keeler, Kenneth Clinger, Cecil Skinner (twice), W. Schofield and Tol Chapman. Several children were born in this house; many are still living. Some are still living in Star Valley. Some time about the beginning of World War II, the owner of the property converted the building into a combination grainery and chicken coop and then the house became another farm utility building.

In 1991, the (Baker) family learned the owner was willing to part with the building and through negotiations, we were able to obtain ownership. Wayne Baker jacked the building up and J. P. Robinson of Jacknife Trucking moved the building, without cost, to this site on property owned by Lloyd Baker which had been filled-in by Lincoln County. Members of the family donated money and labor to restore the building to its original condition. In 1993, the site and the building were deeded to the Star Vallely Historical Society to be listed on the National Registry. After three more years of work by the fine people of the Valley, the Historical Society, the family and Camp Eliza of the Daughter of Utah Pioneers, the building is to be dedicated. 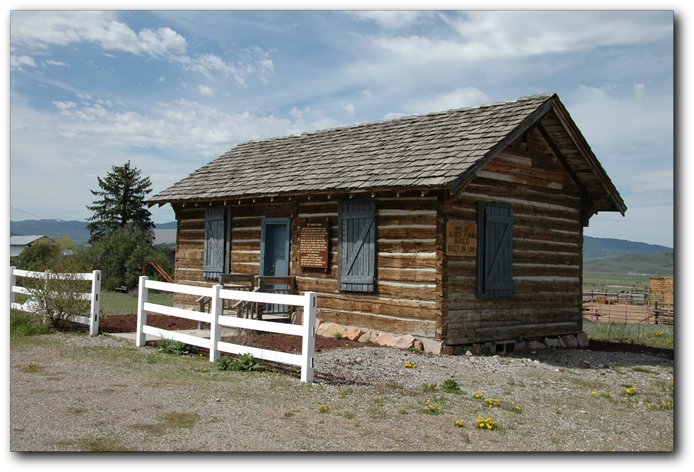 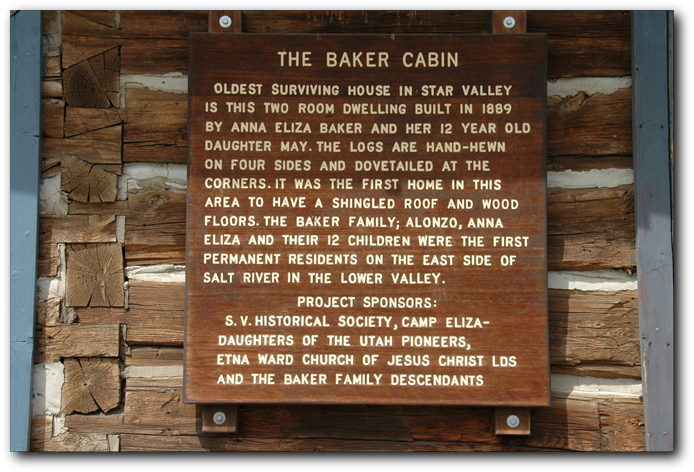 This beautiful structure consists of approximately 3,000 elk (wapiti) antlers and is the largest elkhorn arch in the world. It is one of the most outstanding attractions for tourists in Afton and thousands stop to photograph it each year.

The structure completely spans Afton's Main Street at a height of approximately 18 feet.

Members of the Chamber of Commerce and others conceived the idea of putting elk horns over the Main street in the early summer of 1956. An application was made to the Wyoming Game and Fish Commission to obtain the necessary antlers for the project. Most of the antlers came from the Wyoming Elk Preserve near Jackson, Wyoming. The arch was finished in July 1958 at a cost of approximately $2,500 which was raised by the Chamber of Commerce members through contributions, donations of labor and part of their regular fees. To duplicate this arch today would cost over $300,000 for the antlers alone.

The elkhorn arch has been repaired and added to since its completion. It requires a yearly coating of a special plastic finish to keep it looking new and attractive.

The second picture, below, shows the sides, where there are two additional "arches" of antlers. 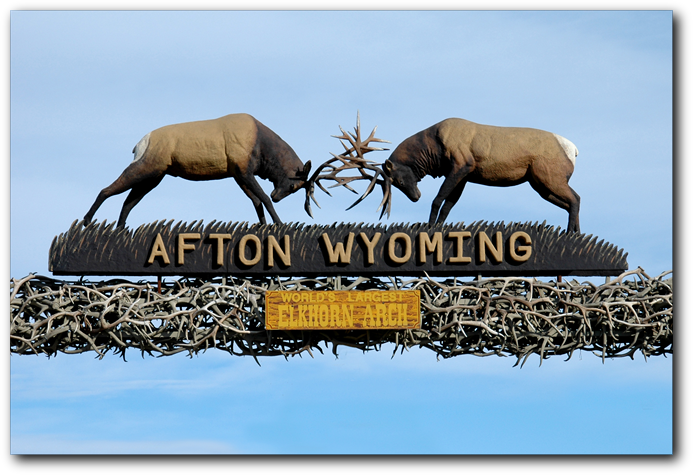 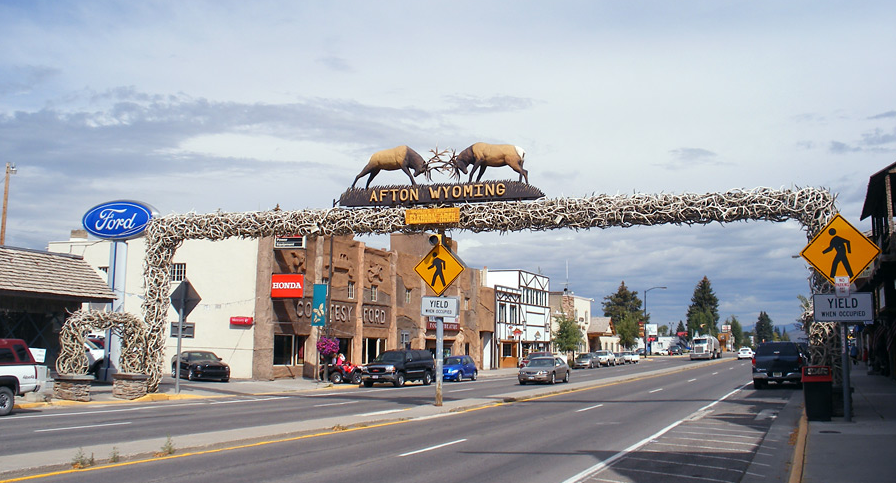 This sign was placed in Auburn by the State of Wyoming in 1993. 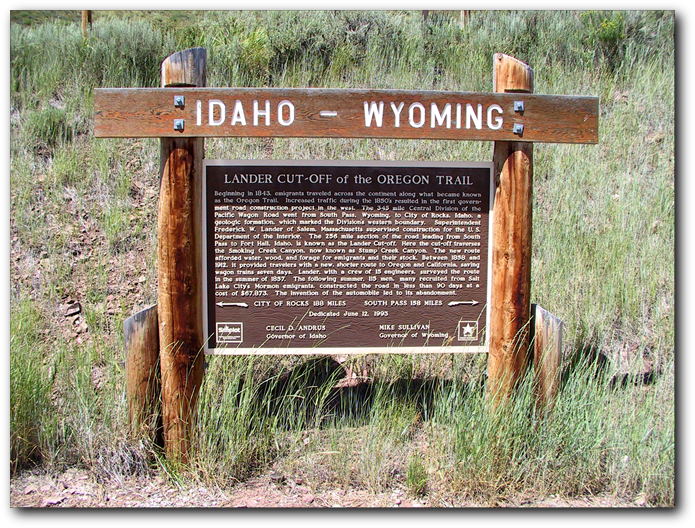 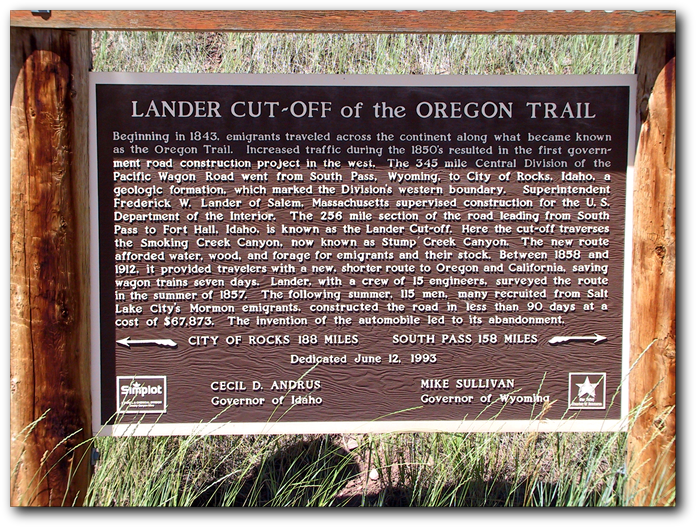 On this map (second picture), you will see a dotted red line depicting the route take by the pioneers who traveled "The Lander Cut-Off". This map also gives you an overview of both "The Upper Valley" and "The Lower Valley" which together define "Star Valley". (GPS: 42.50623N 110.90827W) 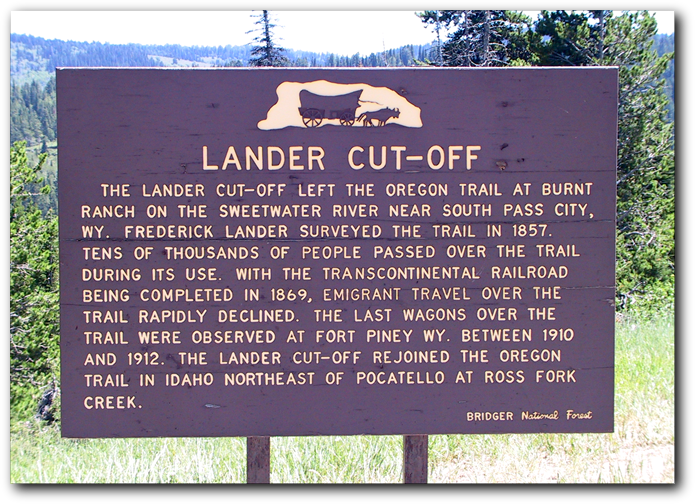 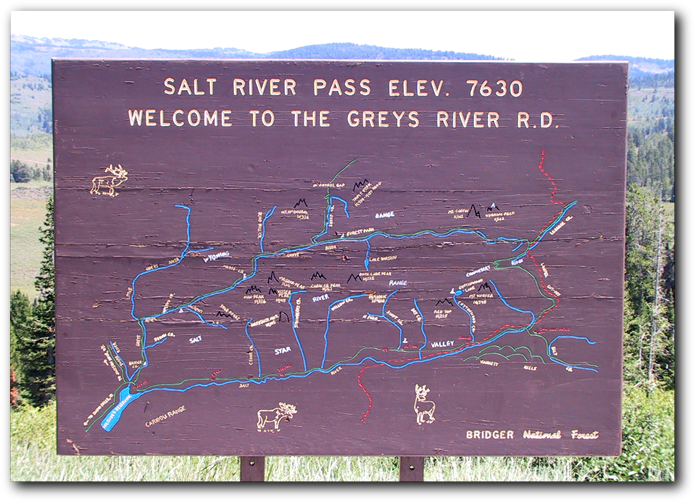 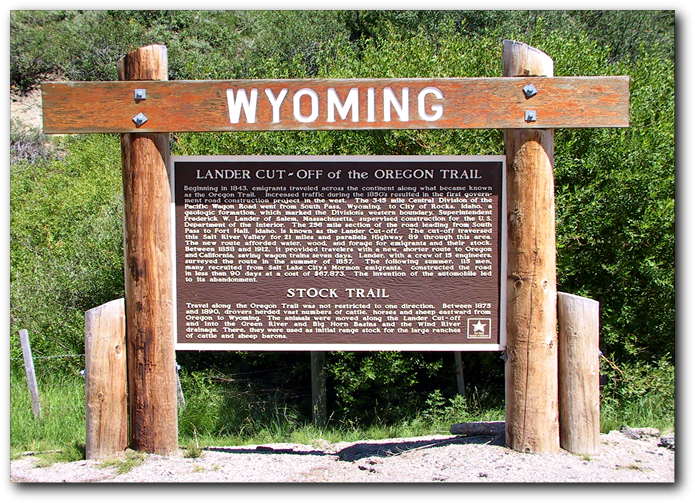 The Old Auburn Rock Church is one of the oldest buildings in Star Valley. Permanent settlers moved into the Valley in 1879. In the spring of 1888, these hardy pioneer farmers and ranchers surveyed the townsite of Auburn into 24, ten acre blocks. In the late summer and fall of 1889, the rock church was erected on the public square in the center of the new townsite. The building served as a place of worship for the Latter-Day Saints and a meeting place for the entire community. Activities in the building included dances, plays, operas, parties, bazaars, reunions, picnics and patriotic and holiday celebrations. It is currently used primarily for Star Valley Historical Society sponsored old-time plays each summer. The building was listed on the National Register of Historic Places on 13 December 1985. (GPS: 42.79157N 111.00119W) 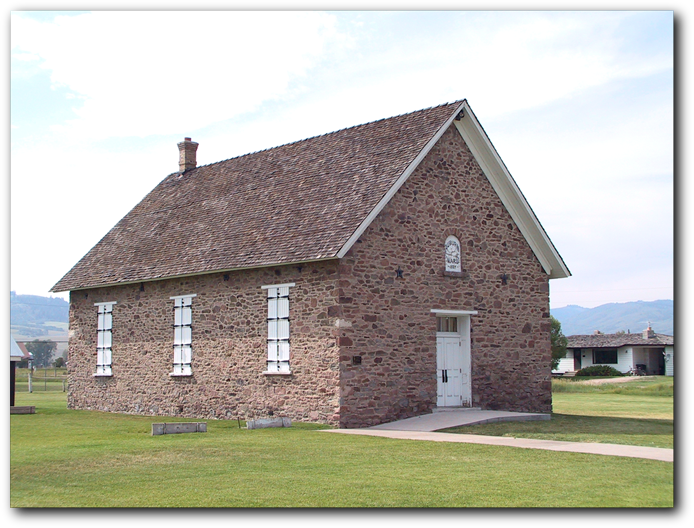 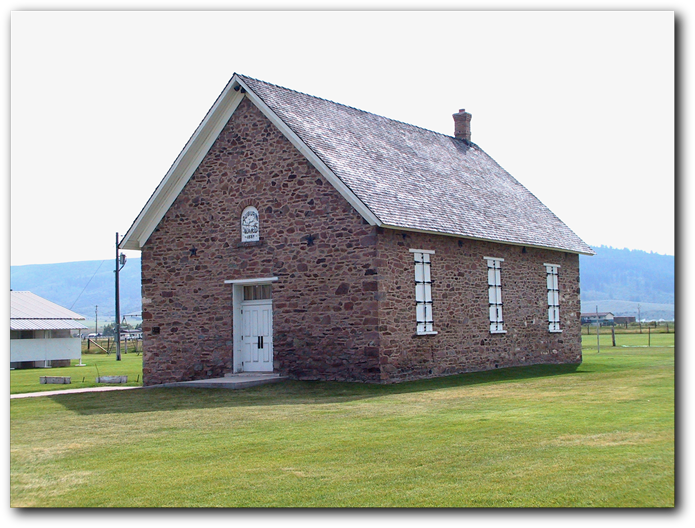 Located about 5 miles East of Afton in the Salt River drainage, is the largest of three natural springs in the world that naturally turn off and on. Water flow is interrupted from anywhere between 3 to 30 minutes, generally between the months of August - May. It is thought that a cave behind the spring creates a siphon which causes interruptions of the water flow. It's ability to turn off and on during low discharge stages has fascinated visitors since prehistoric times. 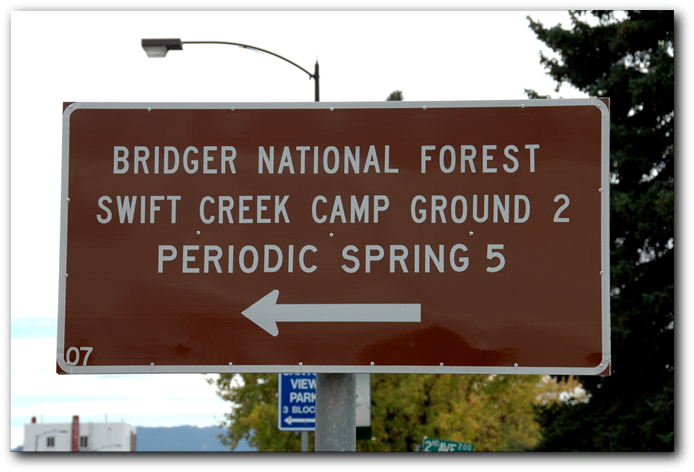 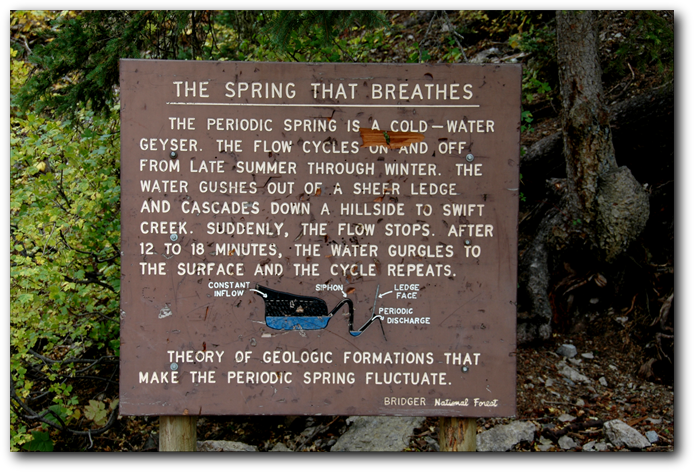 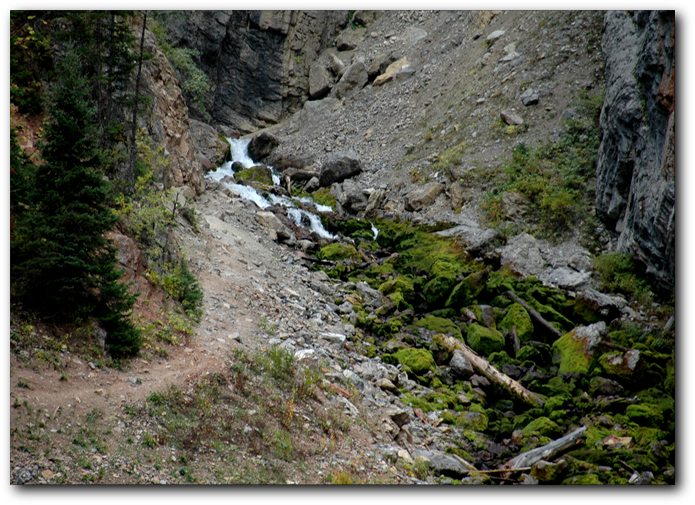 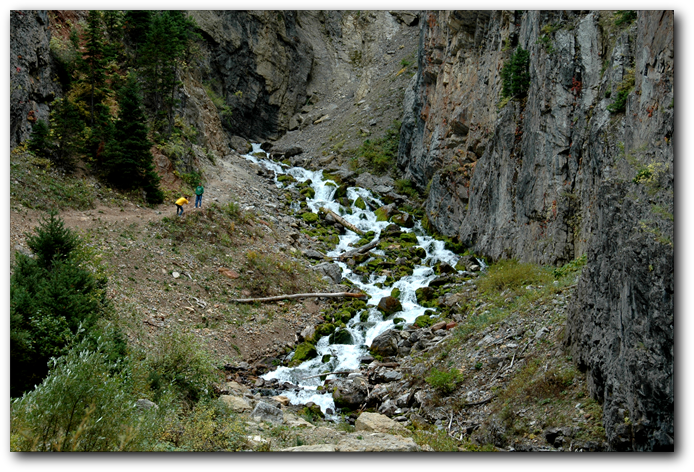 The Salt River Hydroelectric Powerplant, constructed in 1938, is located along the valley floor of the Salt River. The construction of the plant was the first effort to provide electricity to the entire area of Star Valley using Rural Electric Association funds. These monies were subsidized by the Federal Government as part of President Franklin Roosevelt's "New Deal". It remained in operation until 1967, serving for 30 years as the principal source of electricity for the entire area. Located near Etna, it was listed on the National Register of Historic Places December 2nd, 1993. 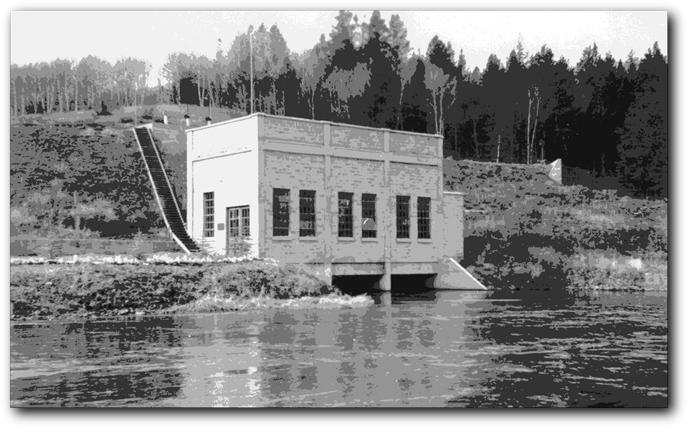 We know it now as Stump Creek. Lander, in his Emigrant's Guide called the mouth of the canyon Smoky Creek. Before that the trappers referred to it as Scott's Fork. One of the attractions of the canyon was salt. Numerous salt springs dot the area. They are crystal clear and the brine is 60% pure salt. While some beds are exposed on the surface, others are overlaid with several hundred feet of earth and rock. Beds of pure salt as thick as 400 feeet have been discovered where modern drilling has taken place.

B. F. White, later the govenor of Montana, and J. H. Stumpp, who served as a representative in the Idaho Territorial Legislature for many years, set up a refining process in 1866 called the Oneida Salt Works, named for the Idaho Territorial County in which the springs were located. The county also encompassed the Wyoming area to the Continental Divide. The mining operation lasted until about 1880 during which time it ws able to produce as much as 1 million pounds of salt per year during the late 1870s.

The primary market for the salt was in the Montana gold fields where it was used exclusively for the extraction of gold ore. The road to Eagle Rock (Idaho Falls) and to Deer Lodge Valley, Montana was the "Salt Road" as so many freighting outfits were constantly hauling the commodity the year round over this road. We were told that the owners of the salt works had taken out millions of dollars worth in the years since they had been in the operation. 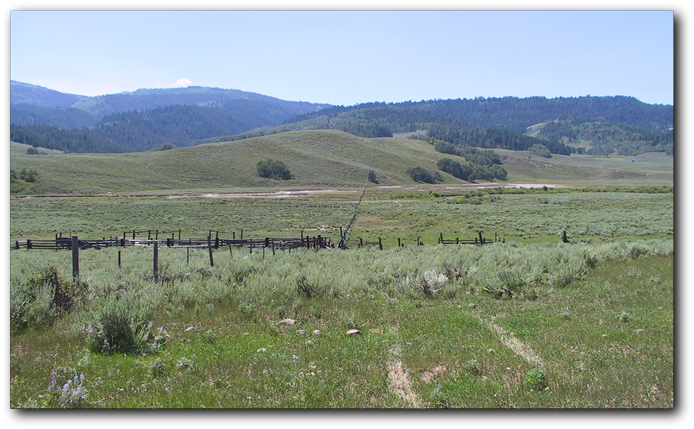 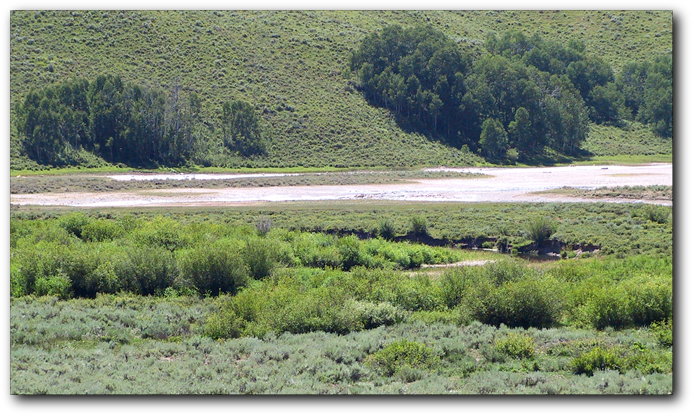 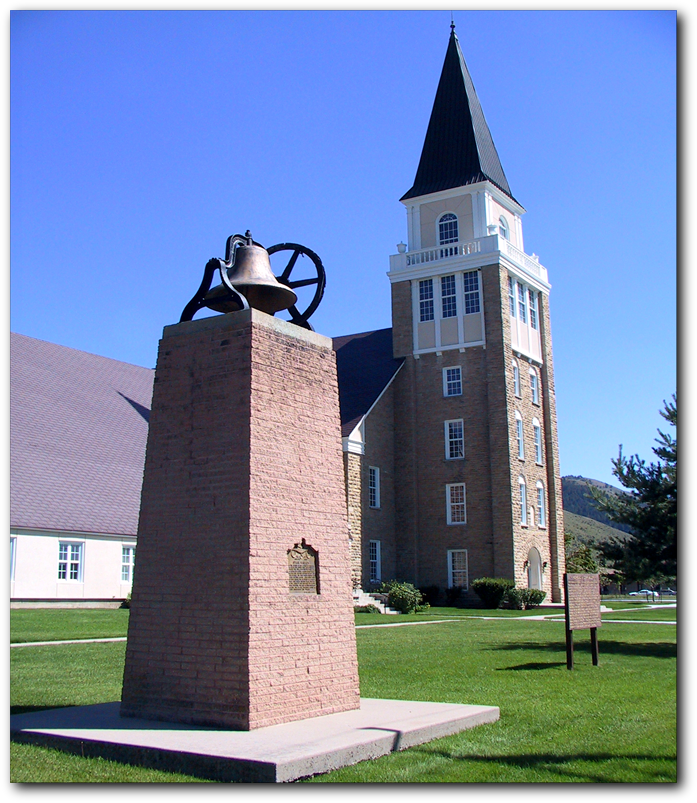 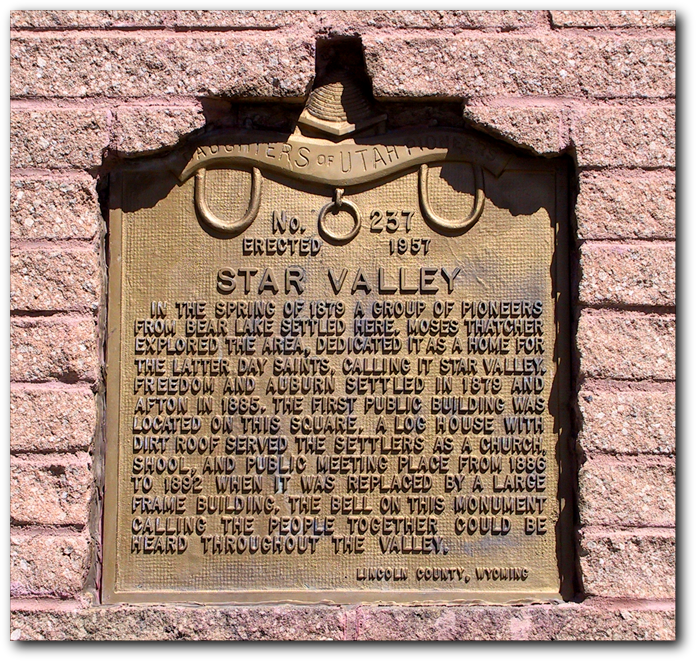 The hot mineral waters of the Sulphur Springs are located about three miles north of Auburn. Indian tribes traveled to the Spring and soaked in the water as well as covering their bodies with the mud; evidently, this was done for medicinal purposes. Early settlers remembered Indians camping there whenever they came into the Valley to exchange moccasins and gloves for hides. According to Uinta and Lincoln County records, the first owner of the Sulphur Springs was Lillian Poorman who took out a patent.

"Sunday the 17th the famous Sulphur Hot Springs at Auburn will be open to the bathing public. A number of improvements have been made at the place this spring and a great many improvements have of late on the road leading to them. Manager Harrison phones the Independent that he will have the roads in splendid shape by Sunday via Grover, but from the Lower Valley it is thought that there will still be several mud holes between the Narrows and the Springs. Not withstanding the general raise in the price of most everything, the price of bathing will remain, as usual, 25 cents with the bathing suit furnished". 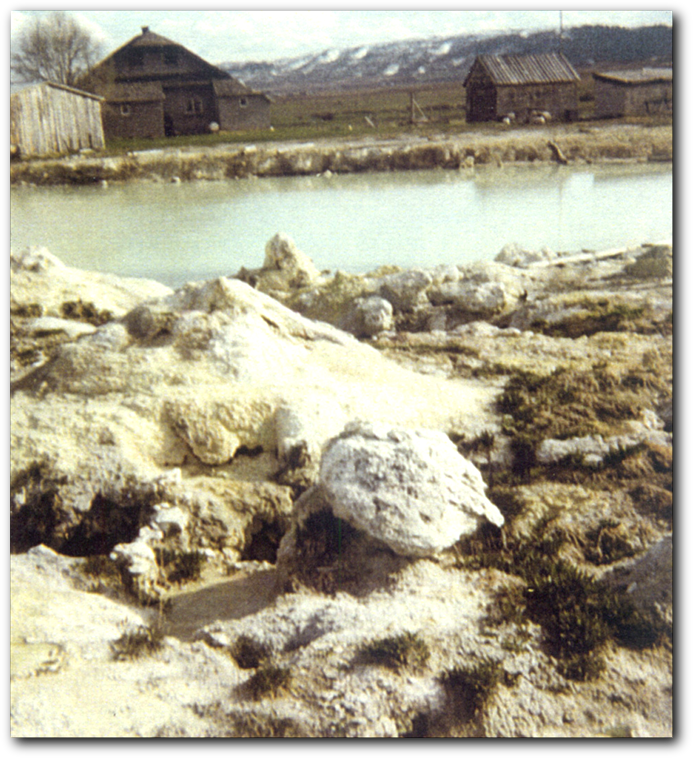